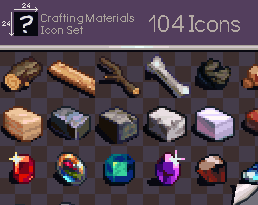 Licensed under CC-0, making it technically Public Domain, allowing you and anyone else to freely copy and use it without restrictions.

24x24 My favorite resolution! Thanks for making these. ♥

hello! That's what I wanted. Thank you. I'll use it well and make a good result.

Hello! Thanks for your great assets! I'm using them in my game, you can take a look. Blue gem sprite was use in experience item dropped by mobs :)

Licensed under CC-0, making it technically Public Domain, allowing you and anyone else to freely copy and use it without restrictions.

(And boy, is Germany an intestering case. Give this a read for an overview of what the CC0 has to go through to say “Yes, I really do know what I’m doing when I want to waive the protections you’ve written into law for me.”)

Epic! You are a true CC0 hero!

Thanks, Now I can make  the game i want

This is so great, honestly this oughta be the first result when sorting by popular for crafting items. Really high quality and super generous to release it for free. Thank you!

Oh my god thank you so much!!!

I have been looking for crafting materials for so long... I've had enough of my logs looking like Jalapenos.

Can I use this for my Unity project (commercial)?

It's a really favorite art.

Yes, you can! It's basically public domain.

I want to use for my commercial project

Hi, I decided to make it CC-0 for the time being.

"for the time being" Be careful, once its CC0 you are allowed to change the licence any time, but everyone who already got it may upload it under a different license. You are no longer copyright owner.

If you want you can add that an attribution is welcome, but not required. I usually attribute, even if not required.

Thanks for sharing this art with us, its beautiful!

once its CC0 you are allowed to change the licence any time, but everyone who already got it may upload it under a different license.

Not being able to revoke permission from someone who’s following the rules and them being able to share what they received on the same terms even after you stopped offering those terms is par for the course. Likewise, you can modify something under the CC-BY or MIT licenses to create a new work and license that work under the CC-BY-SA or GPL, because nothing in the CC-BY-SA or GPL contradicts what you’re already bound to comply with by the CC-BY or MIT licenses. That’s what “GPL-compatible” means in software licensing.

Heck, the Debian Free Software Guidelines tests irrevocability as part of what they call the “tentacles of evil test”. (Basically, if a company like Oracle buys the rights to it, can they make life miserable for previous recipients of a license.)

With a license, if you change the license before anyone downloads it, that’s it. With a public domain dedication, if someone saves proof that it was ever CC0’d, it’s still CC0’d. That’s what it means to waive your rights.

A general public license cares about having a valid chain of “I received the rights and then gave them to…” while a public domain dedication is only concerned with proof that the rightsholder gave up their right to impose restrictions. That’s why the Creative Commons website has warnings when you choose the CC0 form.

If you can demonstrate that what you have is what was put into the public domain, it doesn’t matter how you got it beyond the usual laws about computer hacking and burglary and so on.

Hi, thank you! Good job! Is this usable in commercial projects? Could you please add a .txt with the names of the different icons? I'm not sure on the name of some gems or ingots. Thanks in advance.

Hi, you can use it without restrictions. 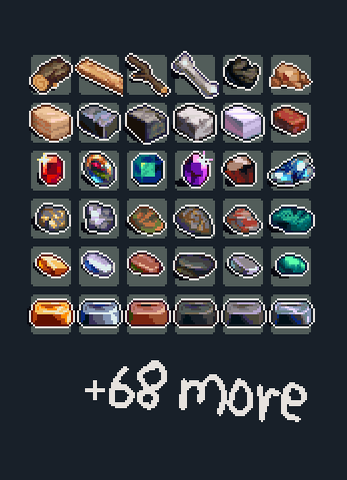